Get fresh music recommendations delivered to your inbox every Friday.
We've updated our Terms of Use. You can review the changes here.

Roots of The Sheckies: Abnormal Adolescents 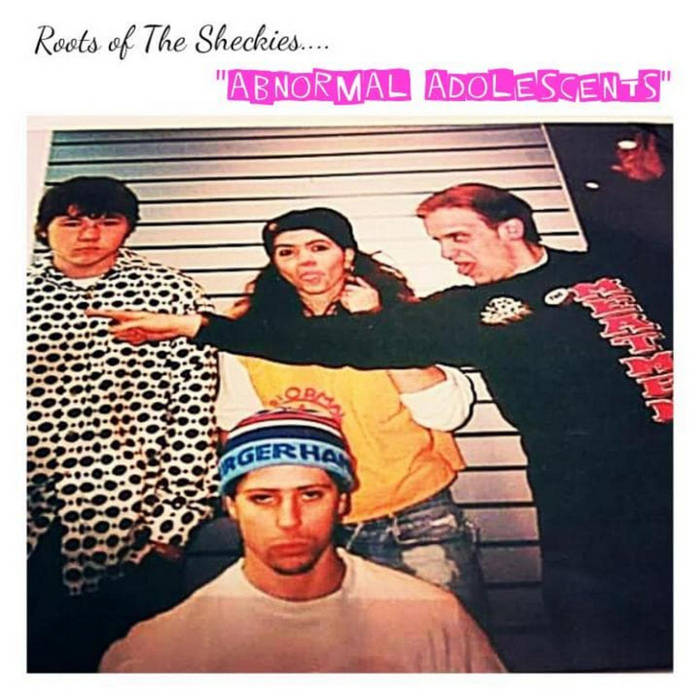 In December of 2002 when Andy was visiting from San Diego (he briefly lived there), we headed to Stealth Studios to record some of my favorite Abnormal Adolescents songs. AA was Andy's first band from the 90's. I wasn't in it, but we did play a lot of shows together with my old band Black Friday. We got it all done in one furious session with Philmore of Stealth Studios providing bass, lead guitar tracks, and some backing vocs.

Track 1. Rock In The Road
Andy's input..."This song was inspired by the slow parts in Suicidal Tendencies' song, "SUBLIMINAL".

Track 2. Scold
Andy's Input..."not much to say here ..it's a Nirvana wannabe song. What is the meaning? There simply isn't one. One of Wagner's song ideas where I took his idea and just made a song out of it.

Track 3. Trailer
Andy's Input...The FIRST real punk/Grunge /Rock n Roll song I ever created while collaborating with someone else. A 16 year old me and a younger "Chris J" wrote this one at his house. His Dad owned a music shop in his house that was located just 1 street adjacent from King's house. It was an amazing feeling being able to create music with someone else. Chris and I would take "Trailer" along with my other faster punk rock songs to our drummer friend, "JOE HOCKER'S" house (which was not far away from Jim Wagner's house) to try to practice & form a band. I couldn't tell you enough how momentous this was in realizing how much I fell in love with the live music sound here. I KNEW THEN I HAD TO BE IN A BAND. Joe's house was the place where I had my FIRST ACTUAL BAND JAM/PRACTICE EVER. The band eventually kicked me out and kept the members...including Chris and my co-written song, "TRAILER." For their own band, "Y-CLEPT," a mostly cover band while I bitterly spent the next year's practicing guitar, staying hungry for the rock, and finally forming my first band, "Abnormal Adolescents." Trailer is a pinnacle song I'm the start of my punk rock evolution.

King: No, I don't worship Satan, I just kept the original part they'd yell 'coz of the dark sound!

Track 4. Eric
Andy's input....If South Jersey was an episode of Seinfeld, Eric would be my Kramer. An eccentric pal of mine who would do the weirdest things like piss in sea monkey aquariums to see how yellow his pee would get after 2 weeks had passed and cooking food with Sterno inside his house when he had a perfectly working oven. We are still to this day very close. I wrote a song about him in '96 about some of his weird exploits.

King: Andy took a quote from my old Black Friday band mate Mike Kutepow and made a song from it. Another Grunge sounding tune. I picked a lot of these songs because I had so much fun drumming them. Another great lead guitar track from Phil here.

Track 6. In My Room
Andy's Input....one of the dumbest and pointless songs I ever co-wrote with Jim Wagner. I swear Jim was self obsessed sometimes...ha

King: A demented nursery type song with slide whistle and cuckoo clock sound effects. Originally Andy and AA lead singer Jim Wagner would trade lines back and forth, so I'm standing in for Wags!

Track 7. Statutory Rape
Andy's Input...Whenever A.A. would make a fast song..You can bet Shane Problem (our 15 year old bassist at the time) was the one that helped co-write it. We always tried to shock people with our subject matter so Statutory Rape was a fitting title. This song was about underage girls we would see while walking the boardwalks of our beaches We used to call them "PROSTITOTS." This song was about the guys who would fuck them. Plain and simple.

Track 8. Sloppy Naked Titty Women (in 3D)
Andy's input....During my Punk Rock career I've always occasionally would write a straight up Rock n Roller tune. This is one of my first. Based on Howard Stern's Butt Bongo Fiesta Video that me and Kingy would watch all the time over at each others houses

King: Inspired from Howard Stern's skit from the Butt Bongo Fiesta video, including sound clips. A rockin' number with more blistering Phil leads. This song is actually one of the first Wagner's Army tunes. That was the band we were forming with Jim Wagner right before I moved to Louisiana in 1998.

The Sheckies Cape May, New Jersey

The Sheckies formed in February 2004. Their name is taken from a character in the movie, “It Came From Hollywood.”

Heavily influenced by The Ramones and many of today’s Pop Punk artists, The Sheckies are in the forefront of the “Pogo Punk” movement.

Bandcamp Daily  your guide to the world of Bandcamp